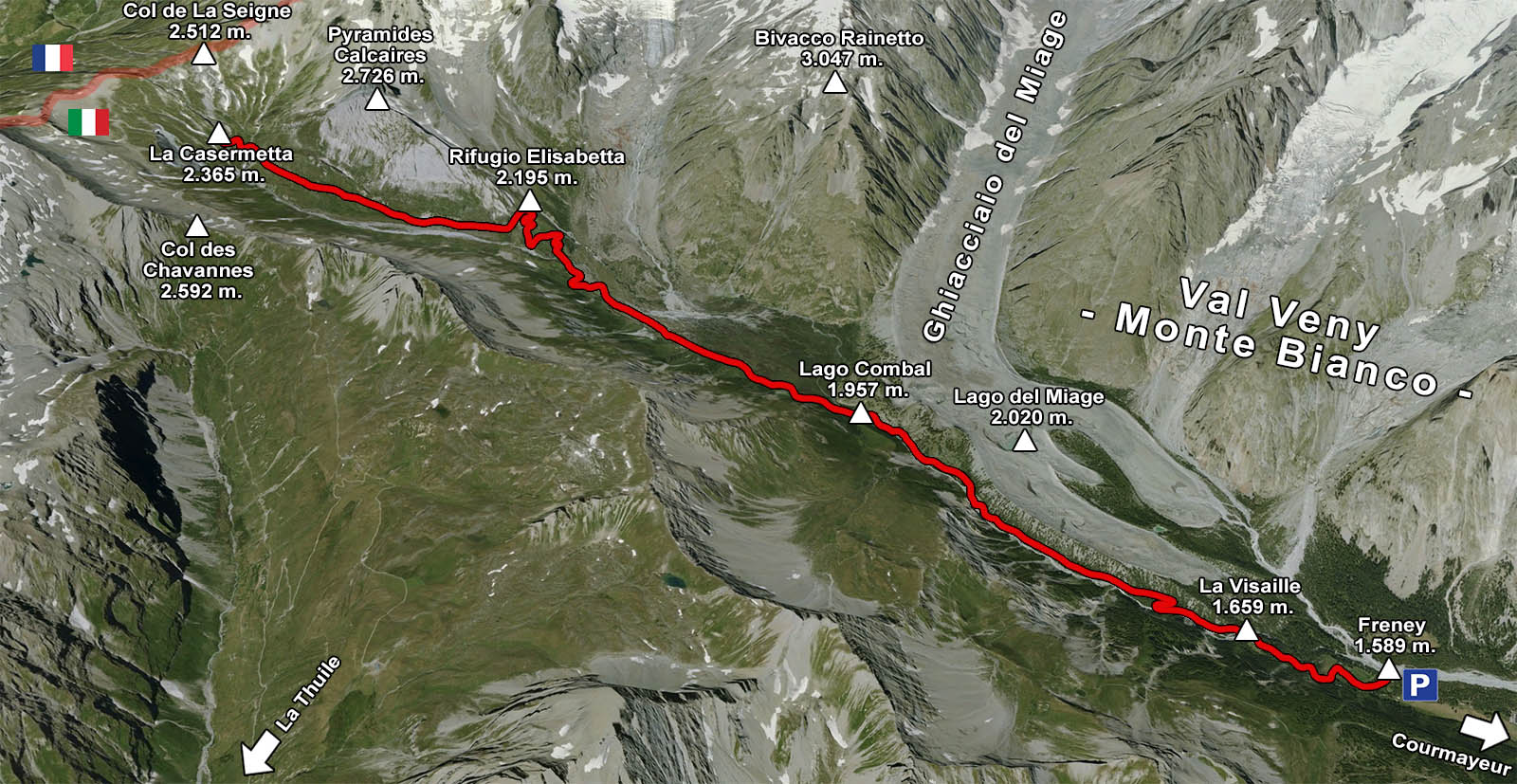 Starting point: Freney 1.589 m. (Val Veny)
the starting point is actually La Visaille 1.659 m. but, as the road was closed to vehicular traffic by a Municipality order,
I had to stop at the previous hamlet
(about an extra 20 minutes of fast walking to get to La Visaille)
Arrival point: La Casermetta 2.365 m. (Val Veny – Monte Bianco)
1st intermediate point: Lake Combal 1.957 m.
2nd intermediate point: Elisabetta Soldini Montanaro 2.195 m. Refuge
Starting point altitude: 1.589 m.
Arrival point altitude: 2.365 m.
Difference in altitude: 776 m.
Location: Alta Val Veny, on the border between Italy and France
Difficulty: E [scale of difficulties]
Hours: 3h 10 minutes for the climb from the hamlet of Freney, up to the arrival at the Casermetta
About 2h 50 minutes for the descent which takes place along the same path of ascent
Period: from the beginning of June (after careful verification of the snow conditions), to mid-October
Equipment required: classic trekking
Trail sign: TMB
Waste: this is what you need to know before abandoning it 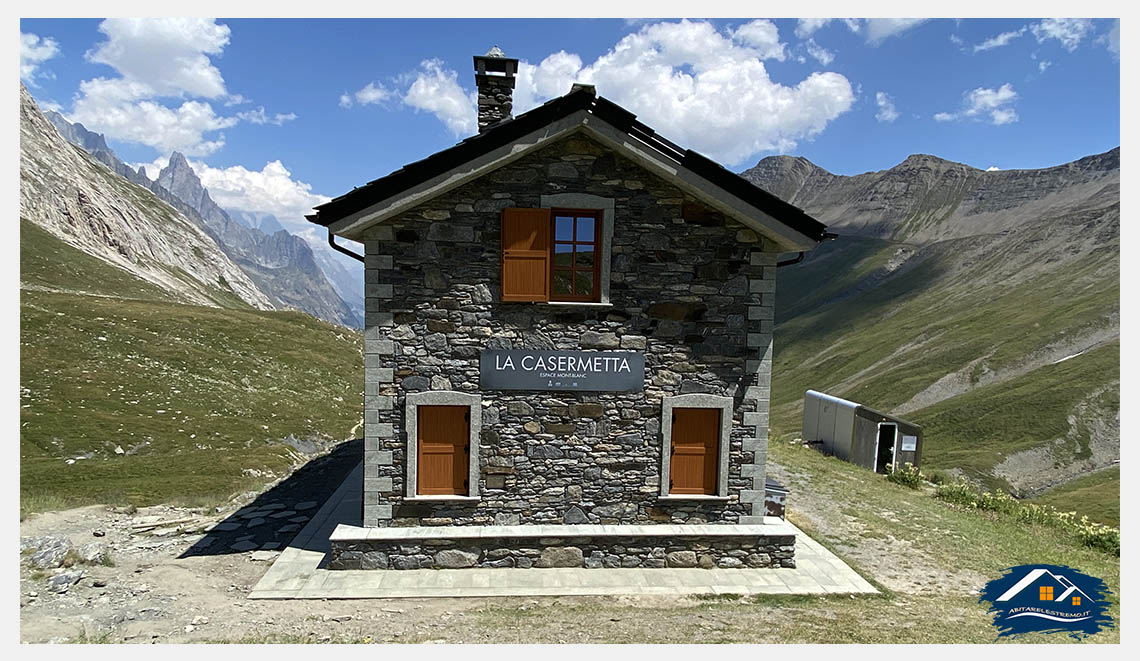 Nowadays, after a long period of neglect, Col de La Seigne and its “Casermetta” – as we know them today -,
have become again a meeting place for all the people who wish to discover this wonderful corner of the Alps,
just like first climbers did.

History of the “Casermetta”
The “Casermetta” at Col de La Seigne is reminiscent of a period of difficult cohabitation between the nations on the
two sides of the Alps, since it used to be an outpost along the French-Italian border, constantly monitored by
garrison troops.
In the 1930s – a period in which international tension increased – spectacular military drill with spacial manoeuvring by the
troops at high altitudes took place in the area of Mont Blanc.
The place experienced a dark age during WWII, a time when the italian troops attacked the French army – which had
already been defeated by Nazi Germany – in the rear.
Nowadays, the remains of the fortifications and shooting posts are still standing everywhere in the area.
Soon after the end of WWII, the history of the “Casermetta” finally took another direction; in the winter of 1945, a group of
applicant ski-instructor trainees led by Francis Salluard decided to set up the Mont Blanc Ski school.
Since the difficulties to overcome were remarkable and considering that economic resources, as well as skiing outfits,
were lacking, the applicant trainees availed themselves of the white ash skis which had been left behind by the
German army during their hasty retreat, on April 25h.

The reconstruction of the “Casermetta” project
The reconstruction of the “Casermetta” of Col de La Seigne – owned by the Regional Government of the Aosta Valley,
is part of the concrete action undertaken within the framework of the “Espace Mont Blanc” prject whitch is aimed at
favouring the knowledge of the natural heritage, as well as awakening public opinion to the protection of the environment
and promoting the Tour du Mont Blanc.
At the beginning of the year 2000, the conditions of the “Casermetta” were very bad.
Reconstruction works with a view to turning the old military barracks into the present reception centre were carried out
thanks to European funding in the framework of the IIIA Interreg Programme.
The “Casermetta”, which is also a working station at the service of the “Corpo Forestale Valdostano” (local Corps of Forest
Rangers), as well as a unit belonging to the alpine networkof the “Sentries of the Alps”, is equipped with an energy supply
system that is based exclusively on renewable sources, such as solar and photovoltaic panels and a small hydroelectric
power station.

Col de La Seigne and its historical background
The events of the so-called “Caserrmetta” (military barracks) are strictly linked to the long history of Col de la Seigne,
a place which has been the gateway to the Aosta Valley, as well as the crossroads to and from France fot people
and commodities since ancient times.
The origin of the name of this place in old but dubious.
Medieval terms such as Mons Senae, Collium de Senia, Alpis Seniae are reminiscent of “Colle del Segnale”, whereas the
Celtic word “sange”, meaning “marshy land”, reminds us of the land which can befound further down, in the area
of Lake Combal.
The Col de la Seigne crossing was already known by the Romans and was used thereafter throughout the Middle Ages,
the period in which it acquired its actual name.
During that period, favourable weather conditions allowed alpine transit at a high altitude for several months a year
Nevertheless, only in 1863 did the Tour du Mont Blanc – with special reference to Col de la Seigne – acquire a key role in the
tales of English climbers and travellers.
The chairman of the Alpine Club, John Ball, mentioned Col de La Seigne explicitly, numbering it among the most panoramic
places of the tour, which “always makes this part of the tour extremely interesting for real nature-lovers”. 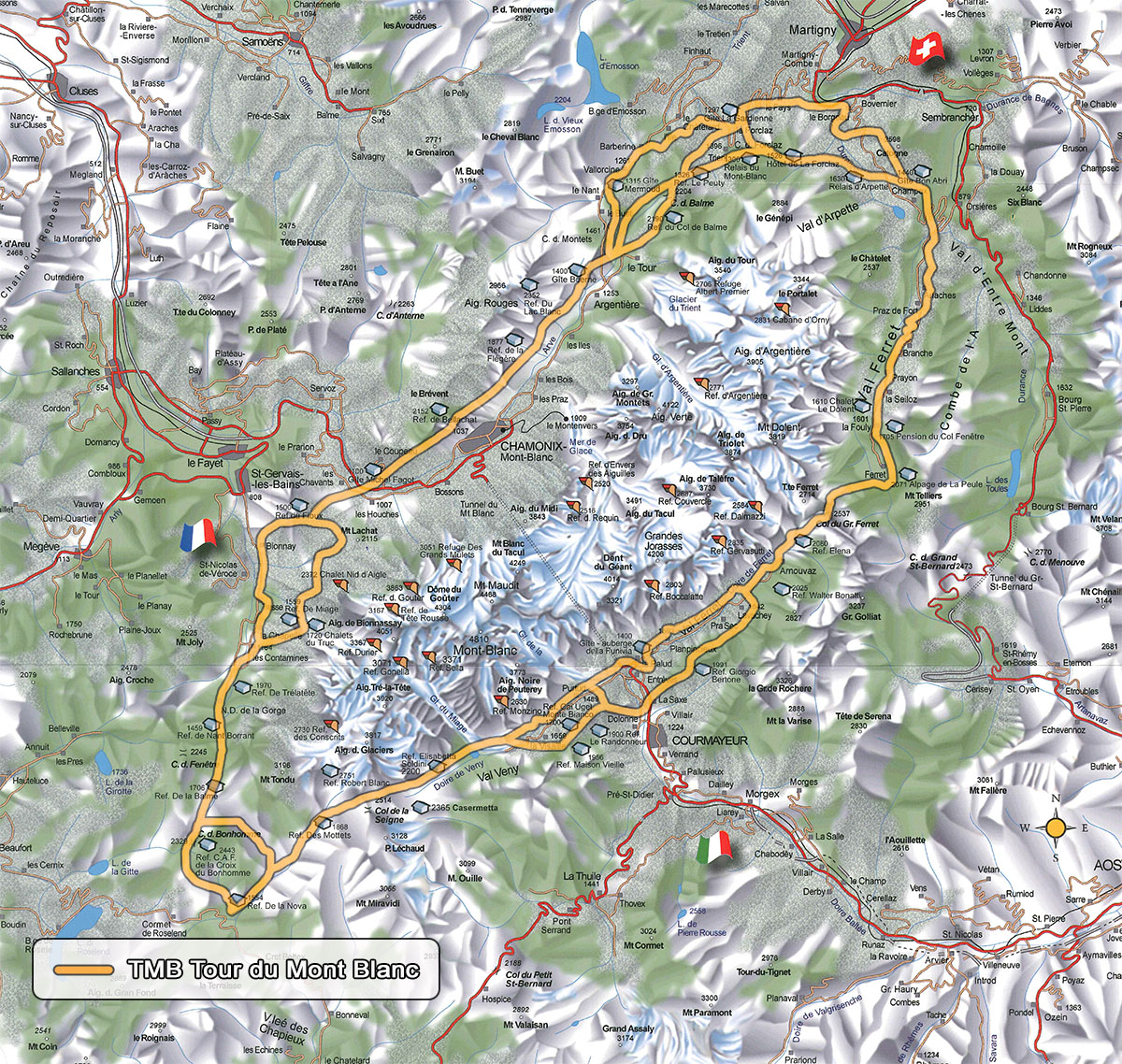 The Espace Mont-Blanc project
“Espace Mont Blanc” is an initiative of cooperation among Italy, France and Switzerland, with a view to protecting and
developing the territories of the Mont Blanc area, halfway among the Aosta Valley, Savay, Upper Savay and Valais.
In a territory where the extraordinary natural and environmental heritage coexists with economic and tourist activities
which are internationally known, the challenge of the project “Espace Mont Blanc” is that of reconciling the crucial need
for social and economic development, which should be as compliant with the values and identity of the
mountain as possible.

Notes: three countries, one region; an area of 2,800 kmq, 100,000 inhabitants and 35 municipalities (15 in Savoy and
Upper Savoy, 5 in the Aosta Valley, 15 in Valais) which, with the support of the Mont Blanc cross-border Conference,
are committed to the safeguarding and preservation of an outstanding region.
A natural treasure, this territory needs all of us to undertake sustainable development.